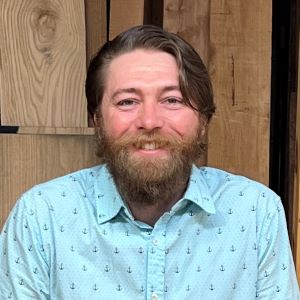 We’re proud to welcome Nic Jackson to the Crafts Center team as our new Wood Studio  Manager. Nic is no stranger to Arts NC State. He previously worked with University as a Props  artisan and carpenter as well as the Stewart Theatre in Talley Student Union as a lighting board  operator and event technician. Nic is returning to woodworking after a 13 year career in the  theatre as a designer, choreographer and technician. During his career, Nic has managed large  commercial scene shops in Chicago, worked with many regional theatres across the country  and taught as an assistant professor at the University of Houston. Why the change, you might  ask? Nic has been a woodworker from a young age where he helped his father in his own  woodshop. He made the decision to step away from large, chaotic projects in theatre and focus  on his own personal craft as a fine woodworker and educator.

Nic will lead the woodworking program with a focus on inclusion and diversity as well as a  staunch process of trying to keep older techniques viable along with introducing and developing  new ones through a diverse range of programming.